Before You Get Started

To make this resource as useful as possible, please make sure you review and understand the following information.

What is the purpose of this resource?

The National Cancer Institute has collected photographs of 29 different pigmented skin lesions, presented as case series, to help patients and other individuals recognize common moles, dysplastic nevi (DN), and melanomas that started from DN. Each case series shows changes in an individual pigmented lesion (mole) over time and across the various mole changes typically seen in individuals from U.S. melanoma-prone families.

What are moles, dysplastic nevi and melanoma?

Who is the intended audience?

This resource is intended for patients and others in the lay public. It only includes images of individuals who are at the highest risk of developing melanoma (i.e. Caucasians). Additional information, including resources for other racial and ethnic groups, can be found in the Intended Audience section.

What information does this resource provide?

This resource provides information about and examples of: common moles, dysplastic nevi (atypical moles) and melanoma. This collection does not include any pictures of non-melanoma types of skin cancer (e.g. basal cell or squamous cell). Since they arise from different cell types in the skin, they look very different from melanoma. Additional information, including resources for other types of non-melanoma skin cancer, can be found in the Intended Audience section.

What is the "ABCDE" rule?

The "ABCDE" rule describes the features of early melanoma. These features are:

Please click on the images below to view examples of moles, dysplastic nevi, and melanoma.

A non-cancerous growth on the skin that is formed by a cluster of melanocytes (cells that make a substance called melanin, which gives color to skin and eyes). A mole may be dark or flesh-colored and may be raised from the skin.

A type of mole that may develop into a type of skin cancer called malignant melanoma. They look different from common moles. A dysplastic nevus is often larger with borders that are not easy to see. Its color is usually uneven and can range from pink to dark brown. Parts of the mole may be raised above the skin surface.

A form of cancer that begins in melanocytes (cells that make the pigment melanin). It may begin in a mole (skin melanoma), but can also begin in other pigmented tissues, such as in the eye or in the intestines.

The DN section is subdivided into two broad categories: stable and fading, and evolving toward melanoma.

Each case series shows changes in an individual pigmented lesion over a number of years and across the spectrum of changes typically seen in U.S. melanoma-prone families. We include a description of the “ABCDE” features for each type of pigmented lesion (moles, DN, and melanomas). Although the “ABCDE” rules were made for identifying early melanoma, they can also be used to describe DN.

For more information about the study from which these cases were identified, please go to: Clinical, Laboratory, and Epidemiologic Characterization of Individuals and Families at High Risk of Melanoma

We thank the study participants for their many years of participation, their willingness to be photographed during skin examinations, and their generosity in allowing their pictures to be included in this resource.

Who is the Intended Audience?

The photographs in this tool show moles on the skin of participants enrolled in the NCI Familial Melanoma Study. This study only includes individuals in U.S. melanoma-prone families who are at high-risk of developing this form of skin cancer. As shown in Figure 1, Caucasians are at the highest risk of developing melanoma. To date, this study has not identified or enrolled any non-Caucasian families; therefore this tool does not provide images representative of other ethnicities. 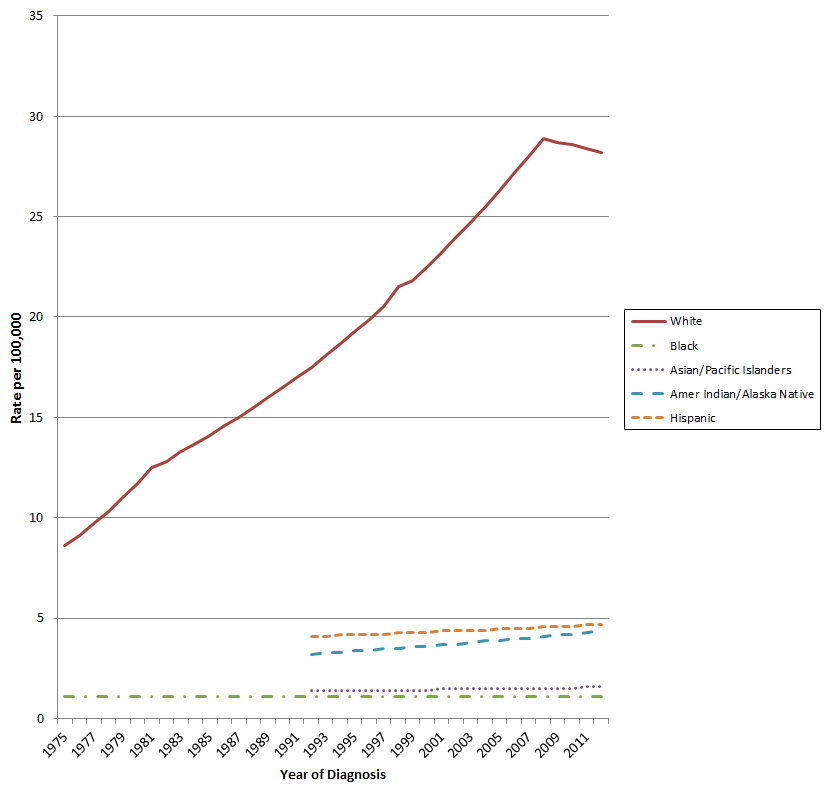 Data points are not included for clarity of presentation, but may be found at http://seer.cancer.gov/csr/1975_2012/sections.html Figure 16.2.

Where can I find information on Skin Cancer in other Ethnicities?

Where can I find information about Non-Melanoma Skin Cancer?

This collection does not include any pictures of non-melanoma types of skin cancer (e.g. basal cell or squamous cell), since they arise from different cell types in the skin they look very different from melanoma. For information on those types of skin cancer, visit the following websites: National Cancer Institute - Skin Cancer (including Melanoma) & American Cancer Society - Skin Cancer Facts.

INFORMED Skin Cancer Education Series The INternet curriculum FOR Melanoma Early Detection (INFORMED) program provides Web-based early-detection training for widespread use, and training in dermoscopy (epiluminescence microscopy), which has been proven to increase diagnostic accuracy during the skin examination.

Sunscreen on Infants? Not Usually—Shade is Best A pediatrician from the U.S. Food and Drug Administration (FDA) tells how to protect babies from dangerous ultraviolet rays.

Sun Safety: Save Your Skin! Advice from the FDA on how to protect your skin from the sun in all seasons.

Dear 16-year-old Me A short film of real individuals whose lives have been touched by melanoma, courtesy of the David Cornfield Melanoma Fund.

How the Sun Sees You A short film of people captured in the ultraviolet spectrum, which highlights freckles and sun damage unnoticeable to the naked eye.